In July 2020, Etsy approached me about having Delta CX bid on some CX/UX research they needed. We were awarded the work, and started in August 2020.

Due to the confidential nature of this project, I (Debbie, Delta CX CXO) cannot discuss any of the details or share any of the artifacts. I can only speak generally and broadly about the project.

This project was planned and mostly completed by me. I partnered with Larry Marine on some of the interviews and analysis.

We were completely on time for the entire project until the end. We needed an extra week for our final report, especially to select and generate our video clip montages, and were granted it. We stayed on budget for the project.

This project was aimed at learning more about how Etsy sellers interact with a certain page/flow on the seller side of the site. Etsy had 6 target groups of sellers. We suggested 8-12 from each group for a 1-hour remote observational study with contextual inquiry.

One “fun” element that we added was a group that we would recruit from an outside panel who would not know we were working for Etsy. We recruiting for any online seller of handmade items, someone who matched the target Etsy seller. We watched people on the same page/flow on a variety of websites to analyze their task and learn what worked/didn’t work on both Etsy’s and non-Etsy sites.

We wrote a session protocol based on having 60 minutes with sellers from North America and Europe.

Etsy did all recruiting and inviting except for our last group, which I recruited from a screener survey through a panel service. We used an online calendar system to schedule participants. I handled all of the participant communications. Etsy handled incentives.

71 participants showed up. I did most of the interviews. Larry did the rest. All were recorded on Zoom.

Larry and I collaborated on an affinity diagram. We used Descript for transcripts and compiling video clip montages. (We didn’t like Descript, and have chosen to not use them again since.)

Given the importance of the workflow we were studying plus the number of people we met, there was a huge amount of data. The key themes became obvious quickly. Also, since sellers trusted us and were so excited to be heard, we had a lot of data about Etsy features outside of the scope of the research. We analyzed, synthesized, and reported on that as well.

Due to the confidential nature of this project, I can’t share any of our insights, opportunities, or suggestions. Later on this page, I list all of the artifacts we delivered and Etsy’s reaction to them.

I project planned this down to the day. I ❤️ project management. 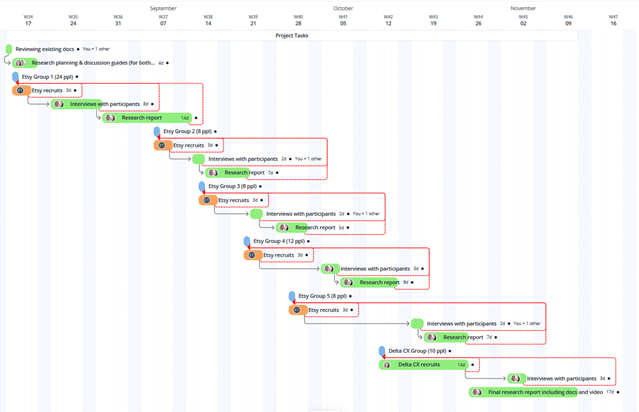 We were completely on time for the entire project until the end. We needed an extra week for our final report, especially to select and generate our video clip montages, and were granted it. We stayed on budget for the project.

Part of the reason our reports were so long and our documents plentiful was because our participants were so excited to be included that we heard many concerns, pain points, and issues that extended beyond the original scope of the project. Participants felt heard and cared about, and told us many stories that fell inside and outside of the original scope. We included these in our reporting and added any actionable suggestions we had in these areas as well.

Our contacts at Etsy were planning to slice the report and documents by domain, and distribute the information and suggestions to each team that owns an area we researched.

The Participant Nobody Will Forget

Many participants opened up to us. One told us a story about how even if her mother had to escape their war-torn region, she would be able to pack up her laser cutter and continue her business somewhere else. Another was grateful that she was able to quit her boring desk job, run her own business, and hire some friends. Another told us about how she has her neighbors sew some items when she gets more orders than she can handle. But there was one participant nobody will forget.

One participant from Spain said she chose to book with me because she just got the feeling I would understand her. I started losing my Spanish when I studied German in university, and I’m now learning Italian as I live in Italy. Her English was OK, and we understood each other very well.

In a calm, warm, intelligent, and straightforward manner, she detailed some very troubling issues she was having, more with Etsy and its policies than with elements of a digital system or web page. She was in fear for her business and her livelihood. At the end of our interview, I found it hard to contain my emotions. Such is the downside of true empathy. Despite the participant sounding cool and unemotional, I really heard her. I felt what she was telling me. And I started to tear up a bit. I told her that I felt emotional at the things she told me.

And then I had a moment of impostor syndrome. I lost my neutrality at the end of a research interview. Am I bad at this? No, I don’t think I’m bad at this. I think this was just very powerful.

Etsy was holding weekly watch parties, so I suggested this one for that particular group. I even spent 4 unbilled hours cleaning up the auto-generated transcript so they would really understand this woman, especially since there were a few things she said in Spanish and a few things I said in half Spanish, half Italian.

The next time I met with Etsy after that watch party, I asked in the video call if anybody else teared up at hearing this woman’s experiences. Every person on the call said they did. I was happy it wasn’t just me! And I realized that that is the type of video or video clip that can hopefully start to create shifts inside of companies. Not everybody will have empathy, but hopefully some will have sympathy for this seller and others like her, and reconsider some policies.

Before quitting Etsy in the middle of our project, our main contact there was well-known information architect and author, Abby Covert. She later left me a glowing recommendation on LinkedIn:

“I hired Debbie and her team to conduct some critical observational research (at scale!) for my team during my time at Etsy. Debbie was such a treat to work with and brought so much value so quickly. Her observational research skills are stellar and her ability to synthesize what she sees into the take aways that a team really needs to understand is such a breath of fresh air in a sea of long research reports and presentations. Don’t hesitate to hire Debbie or DeltaCX for your next project. You can thank me later.“

Etsy was so happy with our work that they asked me to propose a follow-up card sort related to the same area of the Etsy site that we had just researched. Larry sat out on this one. I ran an unmoderated card sort, which received over 50 responses, and the identical card sort as moderated research sessions with 12 participants. All were recruited by Etsy.

Etsy then received a report on the findings from the card sorts, actionable suggestions, and another medium fidelity Axure prototype showing an early concept for a desktop page.

This research project was completed in roughly one month, December 2020.

Email Us
Schedule a Call